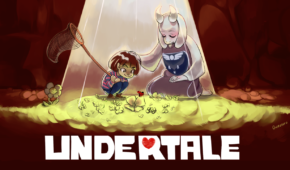 If you enjoy fairy tale stories with an adult coloring, this indie RPG is just what you’ve been looking for. Here you are about to play as a human child who finds himself in a banished world of monsters. Long ago, they were exiled from the earth surface after a thunderous defeat in a war with people. Since then, monsters have lived underground and nobody knew about them until Frisk (that’s the name of the hero) fell into their murky realm and discovered about their existence. Now he has to make his way through the underworld to get back home. During his trip, he will meet different characters and make a series of choices that will influence the entire storyline…

Undertale won’t strike you with advanced graphics or amazing video effect. It is a rather simple-looking game with a retro appearance and classic interface. However, the developers have included a fascinating story with unique characters that will keep you glued to the screen. Each of the monsters you’ll meet will talk to you in their own manner using their own words, phrases and even intonations. There are three ways of playthrough: killing everyone in your path (Genocide), making friends with everyone (Pacifist) and engaging into fights selectively. Depending on which of these ways you choose, the course of events will change. Every choice you make will alter not only the dialogues between the characters, but also the ending of the game. And Undertale will remember your decisions even if you start it all over. That gives the game a tremendous replay value.

The battle system of Undertale is highly dynamic since the combat runs in real time. You have to time your moves to win. Various weapons either found or bought along the way can be used to increase your damage. When the enemy attacks, you still have a pretty good chance to dodge. Special items like candies will help you recover your health, but you can also give them to the opponent as a peace offering. Finally, you can always spare your enemy’s life or run away if you feel like you are about to lose. However, fighting isn’t necessary. In fact, you can play the game without getting involved in any of the combats at all. The choice is up to you. Like all choices in Undertale…

What makes the game really addictive, though, is its amazing atmosphere. The story is created with great taste and style. The dialogues are written simply wonderfully, giving each of the characters just enough personality and humor to keep you interested. It’s also worth mentioning the highly atmospheric soundtrack that accompanies your every move and contributions to building up the tension. There is pretty much to do and discover here and even if you decide to replay Undertale an unlimited number of times, each of them will be different. So if you are looking for a game that’s not so complicated to get the hang on, but that will keep you on edge from the start, this is exactly what you need. Plunge into the fantastic world of the underground monster community and try to find your path home one way or another!